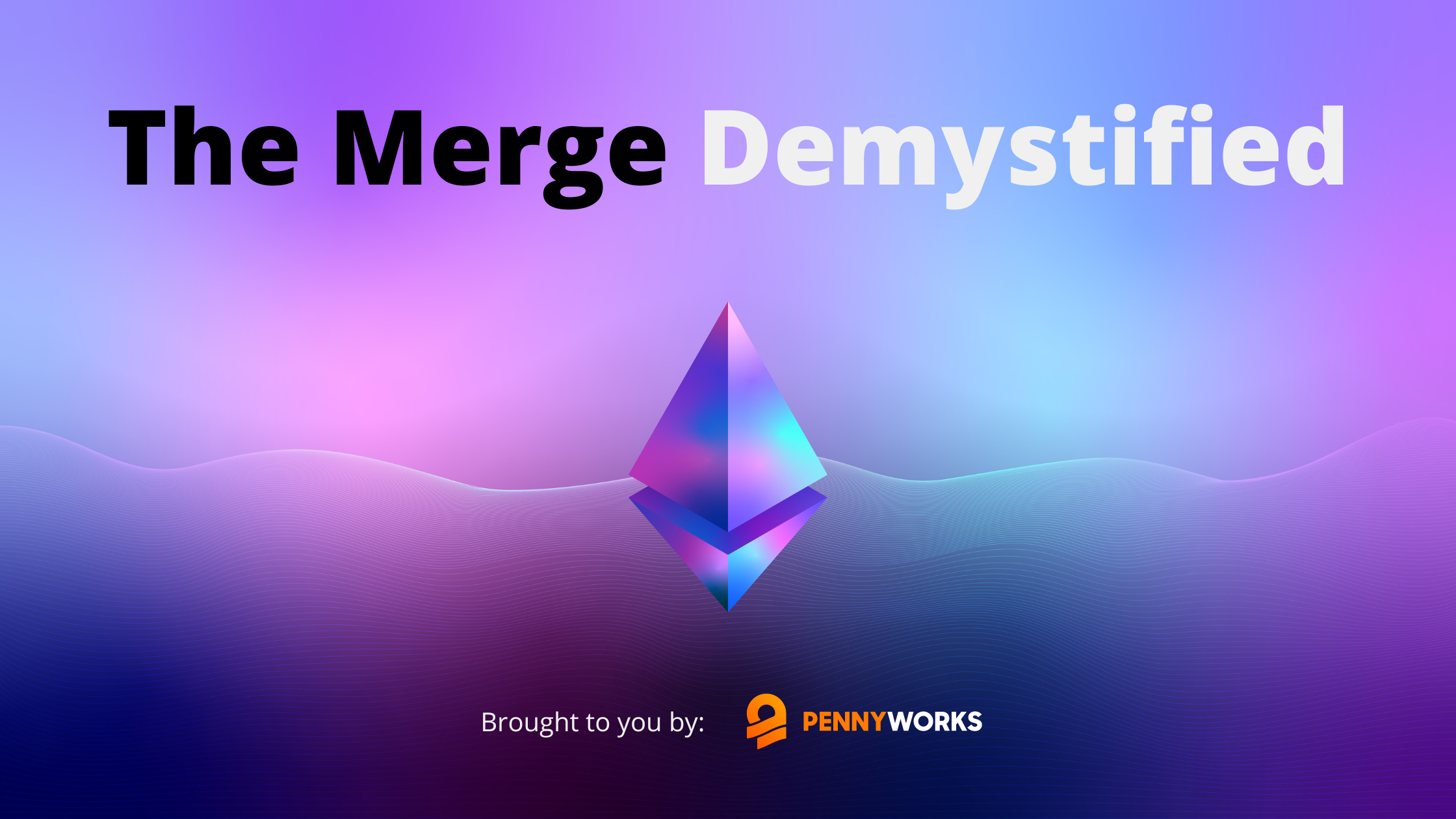 Check out the rest of our series to learn more about:

Looking ahead, how will The Merge change the ecosystem? It’s important to note that The Merge is only the beginning of a very long roadmap which include many other *urges. There’s too many innovations to go over in this article, but the general direction is for bigger, better and faster, with enhancements that could make the Ethereum blockchain processing increase to 100,000 transactions per second.

So we will have the best decentralized world computer, what will you do with it? Here are my views on the 3 big areas that have yet to be tapped.

Let’s get into it!

This means that to unlock the next wave of innovation and wealth creation, we need to be able to create “compliant by default” repositories and marketplaces for intellectual property. A prime example of an early success is the Non Fungible Tokens (NFT) market. Digital art was previously only monetizable through selling physical goods such as a drawing or mugs with the related art attached. With the advent of NFTs, authors are able to directly sell their intellectual property with built in royalties, such that additional sales benefit not only the seller, but also the original artists.

While this is still a very simple method to enforce intellectual property rights, it has already been a boon to artists in developing countries that would otherwise not be able to market or reach audiences, let alone be able to receive payment and have proper records of their artworks.

As more tools are built to facilitate the sharing and proper attribution of intellectual property through the blockchain’s ability to enforce digital scarcity globally, there will be new business models built to leverage this technology for the content creator’s benefit.

This naturally leads to the question of… what about physical assets? Many credit the invention of the joint stock company for accelerating the growth of economies as risks and rewards are more easily distributed across the economy. So why stop there? Why not create more public companies? There are only 20,000 public stocks trading on US exchanges including penny stocks. This seems tremendously low.

A large part of the limitation is associated with the costs of listing a company. If blockchain can dramatically reduce the frictions of codifying legal and profit sharing structures, it could lead to the development of a non-sovereign entity/corporation. While it’s likely individuals will have to conform to local laws, the benefit from a solid set of corporate governance tools can provide a baseline from which ideas can be formulated, and resources dedicated to making it a reality.

We are seeing the first forms of this through the creation of Decentralized Autonomous Organizations (DAOs). Currently most of these organizations rally around a specific blockchain protocol or crypto specific activities. It’ll only be a matter of time before DAOs begin to interact with the broader economy. We are seeing early signs of that as the Maker DAO is the first DAO to lend to a traditional bank.

The natural evolution of the previous 2 developments is that blockchains could become the de facto repository and settlement layer for most of the wealth in this world. If that is the case, what would be the best place for both digital, physical and intellectual assets to be managed?

The myth that everyone needs to be in an office to be productive has been dispelled. However it will still take a long time for us to see the full benefits. The most apt analogy is the development of electricity. Early factories only used electricity as a drop in replacement for their steam engine. All of the buildings and tools were still designed to be clustered around a massive power source, not fully utilizing the flexibility of electricity to align processes into more effective assembly lines and specialized departments.

As such, while I do not know what the remote work of the future will look like, I am fairly certain its value proposition will continue growing as the cost of physical transportation and environmental impacts are fully factored into the equation. Perhaps this means virtual worlds, or perhaps something entirely different, but undoubtedly the world will be much more digitized than ever before. Ready Player One Anyone?

With The Merge only a couple days away, we are at the cusp of a paradigm shift. Ethereum will undergo the biggest protocol change in its history, while dramatically reducing its energy consumption and opening the doors to innovation that could lead to the next 100x to 10000x improvements in performance.

And it couldn’t have come at a better time. As record temperatures sweep across the globe while many developed countries grapple with energy insecurity, Ethereum lays the groundwork to become the energy efficient decentralized settlement layer that powers the next wave of innovation. I’m excited for blockchain’s future and what lies ahead.